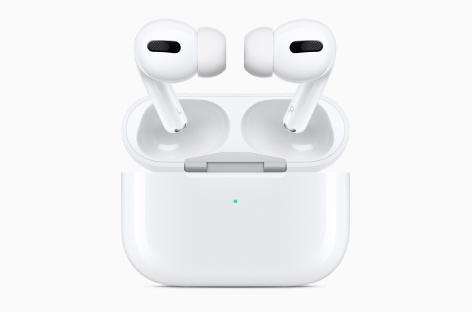 After months of rumors, Apple confirms the launch of the AirPods Pro, a bluetooth headset active noise cancellation that will arrive in stores on October 30

Apple has confirmed the launch of its AirPods Pro , new headphones that, unlike those announced a few months ago, have active noise cancellation , that is, they soundproof and isolate better.

They will arrive at stores on October 30 at a recommended retail price of 279 euros , 100 euros more expensive than the classic AirPods without wireless charging but similar to what brands like Sony charge for their headsets of similar benefits .

And so far, they are only available in white , although it had been rumored that there would be other colors available and matching the new iPhone 11 Pro .

Among its main features, other than noise cancellation, highlights a new more compact design (which is also true in its carrying case), the use of an H1 chip to be able to give orders to Siri , the option of sharing a headset with another person or reading messages received on the phone. They are also resistant to water and sweat .

As for its battery, Apple ensures that they have the same hours of use as previously launched AirPods , although it is expected that this will be significantly shortened when active noise cancellation is used. The AirPods Pro can be charged wirelessly with a base that works using the Qi standard (like the most modern iPhone) and also with cable (includes a cable from the proprietary Lightning to USB-C port in the box).

“The AirPods are the best selling headphones in the world. Thanks to their configuration with a simple touch, the great sound quality and their emblematic design, they have become one of our most beloved products, and with the AirPods Pro the experience is still more magical, “says Phil Schiller, Apple’s senior vice president of Global Marketing.

AirPods have become a symbol of Apple since its launch in 2017, and are one of the most popular headphones on the market today. Many companies have imitated its design and performance in the following years.

However, with its popularity, many reports have also appeared that cast doubt on its durability. Many point out that they are designed to last two years at full capacity, as their battery degrades rapidly.