PortCastello will allocate 26.3 million of the 2020 budget to investments and plans to tender the intermodal station 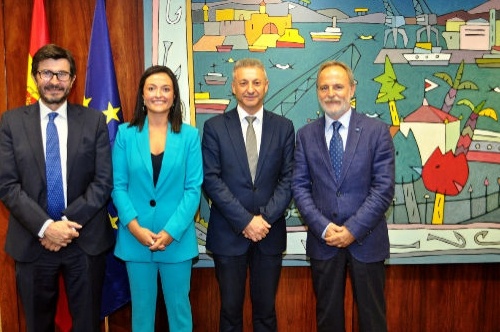 PortCastello will allocate 26.3 million of the 2020 budget to investments and plans to tender the intermodal station

This amount means multiplying by nine investments since 2015, when 3.04 million were allocated. The tender for the intermodal station and southern rail access is also contemplated, two projects to which 2.3 million will be allocated.

The Port Authority of Castellón (APC) has agreed with the Public Organization Puertos del Estado (OPPE) its Business Plan for 2020 which includes an investment budget of 26,296,000 euros. This amount means multiplying investments ninefold since 2015, when 3.04 million were allocated, as reported by the port entity in a statement.

“This budget will allow the promotion of productive infrastructures that will generate jobs and opportunities, such as the internal railway connection in the port of Castellón, the construction of a new liquid bulk dock, urbanization of the southern dock and improvements in the northern dock”, provides the institution. The tender for the intermodal station and southern rail access is also contemplated, two projects to which 2.3 million will be allocated .

In addition, the Port Authority of Castellón expects to invest in energy efficiency and environmental sustainability actions , “through an ambitious environmental protection plan” that provides for 21 concrete actions and “that will place us at the forefront of this important issue,” he said. the president of the entity, Francisco Toledo. In fact, the president of Puertos del Estado, Salvador de la Encina, has conveyed at the meeting the congratulations of the entity’s sustainability department to the Port Authority of Castellón for its environmental protection plan, according to the statement.

The APC Business Plan again proposes the reduction of merchandise and ship rates, which means PortCastelló “will be at the head of the ports of the Spanish port system with lower rates.” It should be remembered that the port of Castellón has reduced rates three consecutive years .

Read More  UK wonders where its workers have gone

The reduction of rates and the approved investment plan, for an amount of more than 80 million and of which 26.3 million are part in 2020 -, “are possible thanks to the profitability of the port of Castellón,” says its president. In fact, according to the data provided by Puertos del Estado, it closes 2018 as the port with the highest profitability regarding own funds among the 28 Spanish port authorities.

These good economic results are the result of revenue growth , – thanks to the increase in traffic and the location of companies in the port through concessions – and the containment of operating expenses, “and position PortCastelló as the best operating results with respect to to revenues from the entire port system, which is a good measure of management efficiency, “he concludes.