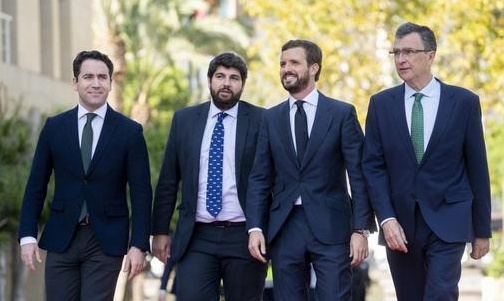 Pablo Casado believes that a new 155 should be broader and encompass Mossos , education and the public media, but before that, “urgent measures” such as “prosecution” should be taken against the leaders independentistas that encourage violence, for a possible hate crime.

“It is not understood that Torra cuts roads and says Tighten the CDR” and that, “instead of investigating” the violent, “investigates those who have played life,” the popular candidate has lamented in an interview granted a Antena 3. With his call for the Prosecutor’s Office to act, Casado also referred to the statements of the Catalan National Assembly ( ANC ), Elisenda Paluzie , that violence in Catalonia makes the Catalan conflict ” visible ” and makes us “to be in the international press on an ongoing basis these days. ” Seeing positive violence could have incurred a hate crime, according to Catalan Civil Society, which has presented a complaint before the Prosecutor’s Office against her, with the “support” of the PP.

” Pedro Sánchez has to decide if he is with the constitutionalists” or with the independentistas, “those who do not close the door,” insisted the president of the PP on account of violence in the streets and Catalan roads. In fact, Casado has stressed that “the State has to guarantee public order in Catalonia, which is not happening today.”

“For the first time there is an explicit link between independence and violence. Therefore, I ask the Prosecutor’s Office to analyze whether these facts are constituting a hate crime and incitement to violence,” the PP spokeswoman also said Tuesday the Congress, Cayetana Álvarez de Toledo . “To what extent is an association legal that explicitly justifies violence as part of its strategy?” He added, referring to the ANC.

The president of the PP has once again insisted that the Executive must already activate the National Security Law : “We must take control of the Security Forces and Bodies to guarantee public order, freedom and security for all Spaniards, but also so that Torra is not the one who directs 16,000 armed men and investigates them. “