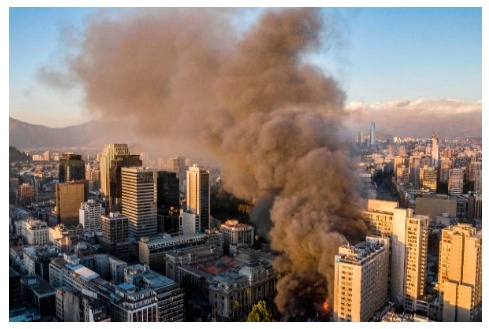 The marches summoned in front of the palace of La Moneda (seat of the Executive) ended up exploding in riots, barricades and fires

The flames took the center of Santiago de Chile on Monday with a large fire in the center of the city that brought the violent face of the social outbreak that the country is experiencing to the forefront , in a day in which President Sebastián Piñera changed eight of his ministers.

After several days in which the civic expression of Chileans who mobilize in demand for structural reforms that generate a more just society was the predominant element, the march convened on Monday in front of the palace of La Moneda (seat of the Executive) ended up exploding in riots, barricades and fires.

The march was suppressed about 200 meters before reaching La Moneda, at which time the barricades and clashes between protesters and police began.

In the midst of the riots, a commercial center began to burn in the middle of Alameda Bernardo O’Higgins, the main artery of the city, which for several hours was grazing the flames and gave off a large black smoke, until Volunteer Firefighters managed to access the place and suffocate it.

It also burned a nearby hotel and the Plaza Italia metro station, among other sources of ignition. An installation of the Regional Secretariat of Health that cares for 700 people daily was also looted.

The events occurred on the first day without a state of emergency in the country, a measure that lasted throughout the past week so that the Army was responsible for security against the excesses with which this social outbreak began, which to date has been claimed the lives of at least 20 people.

The new Interior Minister Gonzalo Blumel said on Twitter that the violence seen this day “is unacceptable and must be rejected by all, explicitly and unambiguously.”

Read More  Alerts grow about the end of globalization

“It does not represent at all the legitimate demands that citizens have raised. The road is dialogue and collaboration . A Social Agenda for a fairer Chile,” he added.

The new spokeswoman for the Government, Karla Rubilar, wanted to differentiate between these acts of violence and the citizenry that manifests itself in peace, a phenomenon that reached its climax last Friday with about 1.2 million people marching through the center of the capital .

“What we are seeing today in the center of Santiago and in some small demonstrations in regions, it is not the people who want social justice, we are seeing people who want destruction and chaos ,” the former mayor (governor) of the Metropolitan region, in which the capital of Chile is circumscribed.

The former mayor was on Monday morning one of the protagonists of the deep cabinet remodeling that Piñera did to face the political and social crisis in the country.

The president got rid of some of the people he trusted the most , such as Interior Minister Andrés Chadwick or the spokeswoman, Cecilia Pérez, faithful Piñera squires in his first term (2010-2014).

The Treasury portfolio was in the hands of economist Ignacio Briones, who until now served as dean of the School of Government of the Adolfo Ibáñez University.

The changes were criticized by the opposition, who did not see in these changes what was expected of the president at a time of social crisis like the current one.

Thus, the senator of the Socialist Party Carlos Montes wrote in his Twitter account that “unfortunately, this change of cabinet, with reiteration of many names, does not live up to what is required at this time.”

For her part, the representative of the left-wing coalition Frente Amplio Beatriz Sánchez said on Twitter that Piñera “only moved pieces” when what the Chileans demand is “to change the board”, which in her opinion means “summon a plebiscite to that the way out of this crisis be resolved democratically. “

In a similar sense, the president of the Chamber of Deputies, Iván Flores, of the Christian Democratic Party, said that “more than the names (of the new ministers) the substantive is a change of course and a rudder towards where Chile has to go, and for that we have to start to date the commitments. “

“When do we start with the New Constitution in a process where citizenship can express themselves for a new Fundamental Charter and among all of us build a more just country that citizens have demanded from us?” Flores said, according to the local Bío Bío radio.

In this regard, the opposition senators will present a constitutional reform project Tuesday that will contemplate two alternatives: constituent assembly or convention.