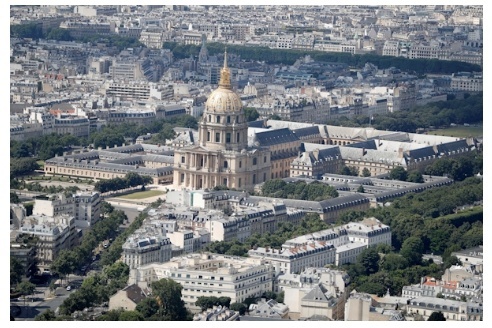 It is noon and only a handful of tourists and a group of architecture students lurk around Napoleon’s tomb . The only tourist guide gives explanations to a family. He emphasizes the paradoxes of the site: “Impressive but sober”, “a revolutionary under the dome that Louis XIV raised, incarnation of absolutism” …

But what catches my attention is this: “It is in the center but in a crypt, six meters below the level of the church.” It is perhaps the perfect image. Because Napoleon is still a myth today. But he was a coup. It burned Europe. He won battles but lost wars. He left France in ruins . And he died in exile.

But here it is. Like a hero. With the names of its eight most important military victories engraved on the ground, surrounded by statues with laurel wreaths. “The green granite plinth supports the quartzite sarcophagus of Finland. This stone resembles the porphyry and its dark red color recalls the mantle of the Roman emperors” I read in the official guide. But six meters below ground level.

It is estimated that the Emperor has inspired more than 100,000 books and about a thousand films. Here in the store of the Army Museum, which is in the Invalids as the grave of Bonaparte, there are more than 50 titles for sale. The elegies predominate. And those who have many photos.

Next, offer shirts (pay two, take three). “Born in Ajaccio. On tour” says in English! the most original with the silhouette of the Emperor on his back. There are Napoleon champagne, swords, bicorn and lead soldiers, from 24.95 euros monochrome to 149 euros with the mantle and the imperial crown. Of course Regarding souvenirs, we are facing a hero from France.

On the way I stopped at the ‘Compagne’ bookstore, next to the Sorbonne. They have one thirty books on the subject. The employee recommends “Bonaparte” by Patrice Guerniffey . “It’s serious, the best of the modern.” I ask him how many are hagiographic and he shows me half. “Starting with Stendhal and following all these of the Bonaparte Foundation.”

Critics? After thinking, I chose “Napoleon” by Jacques Bainville. It is a classic (edited in 1931) and was a bestseller . The author, next to the hard right, dedicates the last chapter to the transformation of failure into legend. And it contains a mythical phrase: “Except for glory, except for art, it would have been better not to exist. Everything well added, his kingdom that came, according to Thiers, to continue the Revolution ends in a frightful failure.”

Roger Caratini , who wrote himself the Encyclopedia Bordas, published in 1998 a book announcing his intentions from the title: “Napoleon, an imposture”. Quote: “He abolished all public liberties, censured, imprisoned, shot, tortured, robbed, made war on all the peoples of Europe, restored slavery in the West Indies, enacted racist anti-Jewish laws … A dictator only surpassed in dead for Hitler. “

Along these same lines, the former Socialist Prime Minister, Lionel Jospin, published in 2014 a relentless allegation, “The Napoleonic Evil.” According to him, “Napoleon turned the ideas of the Revolution”, developed “a form of extreme domination,” a “despotism” and “a police state” …

… But the one who sold more books (without leaving politics) was former Gaullist Prime Minister Dominique de Villepin . Forofo and collector of manuscripts about the empire, dedicated several books to an “exceptional man.”

And to all this that the French think? Florian, a Parisian from my neighborhood, replies to me: “I am very little chauvinist and I pass all the imperial paraphernalia. But we must recognize that he bequeathed us the Civil Code. I value that aspect more than the facts of weapons.”

Ipsos did a survey in 1999. 38% associates its name with wars , 27% with positive things (the Civil Code, the Legion of Honor), 19% with a dictatorship and 10% with the projection of France. Those who believed him “continuator of the work of the Republic” (39%) and those who thought that he “had betrayed” (38%) were divided equally.

“Why Napoleon after the apolitical withdrawal from Russia [where he lost 400,000 soldiers] and the final defeat of Waterloo can have fans, even fans?” Caratini wondered.

The answer is perhaps here in the Invalids. Dead in Santa Elena in 1821, he was buried there until 1840 . Then Luis Felipe, king of the French (1830-1848), agreed with the English to return the remains of the Emperor. “I hoped to increase its popularity,” admits the official guide. Come on, like when Macron made a pilgrimage to De Gaulle’s grave … Everything is good for the pot of the national story.

Luis Felipe, constitutional monarch, wanted to associate his reign with the memory of past glories. He sent one of his sons for the remains, organized a majestic funeral in Paris and decided to bury him where “the soldiers of the country rest . “

Actually Bonaparte had dreamed of a family pantheon in Saint Denis where the kings of France are buried. But he wrote: “I want my ashes to rest on the banks of the Seine, in the middle of that French town that I loved so much.” This reads at the entrance of the crypt.

Well, the Seine is next. In addition, Napoleon himself had ordered the burial of two marshals, Turenne and Vauban. And return to the cult the Church, which with its golden dome was the tallest building in Paris until the Eiffel tower was built.

Until 1861 Napoleon’s remains were not placed in his quartzite sarcophagus in Finland. Inside there are five coffins, one inside the other . (Two lead, one mahogany, one ebony and one iron). Around the gallery of the crypt there are ten marble bas-reliefs that evoke their civil accomplishments. Among them, the Civil Code indicated by the surveys and my neighbor … and that was the work of Sieyès, basically.

Majestic but six meters below the level. Dictator or hero? As historian Albert Sorel said : “The history of France is a persevering effort to match historical evidence with political reality.”