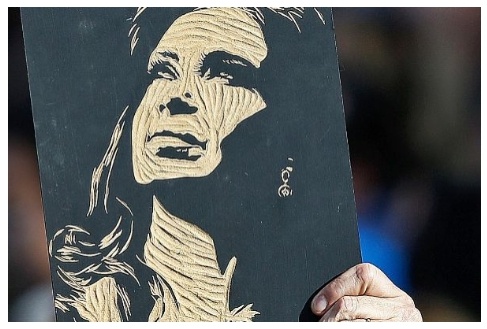 Before the first, in which Alberto Fernández won, there were 74 ‘K’ prisoners, while now there are 17

There is something that any Argentine has very clear. Justice may well be represented for centuries by a bandaged lady who carries a scale in one hand and a sword in the other, but that is no guarantee of anything in the country, because there is a sense that she never loses, that of smell. And see everything, even before others.

Argentine judges are smelling the change of power, advancing a triumph of Kirchner Peronism in the presidential elections yesterday after four years of the social-liberal Mauricio Macri in the Casa Rosada. And those judges, attentive to the dictates of that overdeveloped smell, act accordingly. According to an estimate of Infobae, the most read website in the country, before the primary of August 11 there were 74 ‘K prisoners’ in Argentine prisons. Today there are 17 .

What happened after those elections won forcefully by the Peronism of Alberto Fernández? A fundamental change was that of the interpretation of the penal institution of pretrial detention. During the macrismo there were judges who applied it with great amplitude. If the defendant is a former official, then it means that he has sufficient power and links to obstruct the investigation, to hide or annul evidence. Better have him in jail. Today, with Fernández caressing the Presidency, the interpretation is different: if the investigation of the case is over, there is no reason to think that the defendant can hinder anything. Fernandez himself said, weeks before winning the primaries, that many judges should be investigated for the content of their sentences .

Amado Boudou , who was vice president of Cristina Kirchner, Fernández’s formula partner, remains in prison with a firm conviction, but the release of prisoners involved in serious cases of corruption, or in the dark cause surrounding the late prosecutor Alberto Nisman , shook Argentine public opinion in recent days,

“Free! Thanks to everyone! Let’s go for the missing ones. For a # ChristmasSinPresxsPolíticxs, ” Fernando Esteche wrote on social networks and appealing to inclusive language. Who is Esteche? A political leader K, former leader of the street crash group and accused of participating in the cover-up of the attack on the Jewish mutual AMIA in 1994. Before dying in circumstances not yet clarified, Nisman, special prosecutor for the AMIA case, had concluded that the memorandum of understanding that Cristina Kirchner had agreed with Iran implied the cover-up of the Tehran regime, which is considered as the instigator and author of the attack that killed 85 people in the center of Buenos Aires. Nisman appeared dead in his apartment on the morning he was going to exhibit before the National Congress.

Most of the prisoners of the Kirchnerist years lost their freedom, however, due to corruption. The megacause known as the notebooks of corruption involves former ministers and secretaries of state, in addition to Cristina herself, prosecuted in 12 cases, although released for her privileges as a senator, which will continue if she is elected as a few weeks Vice President At the head of the case is Judge Claudio Bonadío. The Kirchner Administration (Néstor and Cristina, successively) is accused of having organized an extortion system for the local business class, which to obtain public works contracts should provide impressive figures. A story linked to the unusual moment that starred José López, a former secretary of Public Works, who in the middle of the morning threw sports bags full of dollars (nine million) in a convent of nuns on the outskirts of Buenos Aires.

He is still in prison, also his direct boss, Julio De Vido, who was Minister of Federal Planning. But many others regained freedom. Recently, Cristóbal López, one of the great beneficiaries of business during Kirchnerism, and his partner, Fabián de Sousa, did so. López was prosecuted for a tax evasion close to 900 million dollars. With that money, he financed, among other businesses, a media conglomerate that has the crown jewel in C5N: close to Kirchnerism and a strong opponent of Macri, it is the most watched news channel in the country.

López and De Sousa were released after paying a bail of one million dollars. Bonadío, who days ago had rejected the release, was forced to order after a decision of the Court of Appeals. In this cycle change environment, journalist Hugo Alconada Mon, a specialist in corruption issues, believes that the cause of the notebooks could remain nothing, even if it has already been raised to oral trial. “Because of how the hand comes, Bonadío may ask for retirement.”

Months ago, López starred in an unusual moment during a visit by Germán Garavano, Minister of Justice, to the Ezeiza prison, near the international airport of Buenos Aires. Behind the bars, Lopez shouted to the minister: “We are going back, and whoever is going to be inside is going to be you . ” Garavano did not get to hear it, the journalist Nicolás Wiñazki said in “Clarín”, but everything indicates that the message reached whom it should reach.